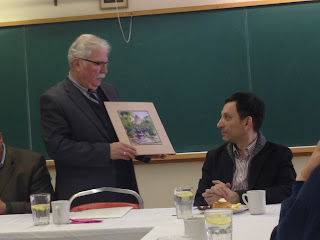 Dr. Roman Yereniuk presents a gift to the 2016 J.B. Rudnyckyj guest speaker, Vitaly Portnikov
at a luncheon held at St. Andrew's College, U of M, on Monday, March 21, 2016. 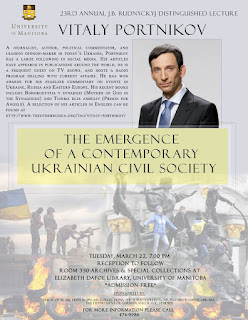 The 23rd Annual J.B. Rudnyckyj Distinguished Lecture took place on Tuesday, March 22, 2016, in the University of Manitoba Archives & Special Collections. The guest lecturer for the event was, Vitaly
Pornikov.  His lecture titled, The Emergence of a Contemporary Ukrainian Civil Society.  Mr. Portnikov discussed the emergence of a civil society in Ukraine following the Orange and Euromaidan Revolutions that took place in 2004 and 2014 respectively, -- and in light of the ongoing conflict in Ukraine’s eastern oblasts of Donetsk and Luhansk. Special thanks goes to Dr. Myroslav Shkandrij (Department of German & Slavic Studies) for providing the simultaneous translation (from Ukrainian into English) of Mr. Portnikov's talk during the event.

Vitaly Pornikov is a journalist, author, political commentator and leading opinion maker from Kyiv, Ukraine, -- Portnikov has a large following in social media. His articles have appeared in publications around the world and is a frequent guest on TV shows.  He hosts a popular weekly radio program dealing with current affairs.  In addition, he has won numerous awards for his fearless commentary on events in Ukraine, Russia and Eastern Europe.

The well-received lecture had around 150 members of the university and external communities in attendance. The talk was sponsored by the U of M Archives & Special Collections, the Slavic Collection (Elizabeth Dafoe Library), and the Department of German and Slavic Studies. Following the lecture, Vitaly Portnikov continued to answer questions at the reception that followed his talk, and signed copies of two of his book, Bohorodytsia v synahozi (Mother of God in the Synagogue) and Tiurma dlia anholiv (Prison for Angels).

Posted by James Kominowski at 2:00 PM No comments: