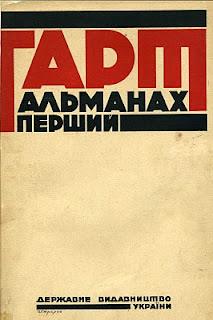 The University of Manitoba Archives & Special Collections' Rare Book Room holds the Ukrainian Literary Avant-garde Periodical Collection. The collection includes such titles as Nova heneratsiia (The New Generation), Chervonyi shliakh (The Red Pathway), Krytyka (Criticism), Pluh (The Plough) and Hart (Tempering). All were published in Ukraine between the mid-1910s to the 1930s. A significant number of literary journals appeared in print during the 1920s – a time of great excitement and experimentation in the Arts. Ukraine as well as the other Soviet republics at the time were undergoing a national re-awakening of its language, literature, and culture. The theatre, the fine arts and the various literary movements looked westward to developing their crafts, – as a result new publications expounding this new experimental era began being published. Among the literary figures that were most closely associated with these publications include: Ivan Dniprovs’kyi., Volodymyr Sosiura, Pavlo Tychyna, Mykola Kulish and Mykola Khvyl’ovyi.
This unique collection of journals in their original paper/print format is available to faculty, students and researchers.
Posted by James Kominowski at 10:45 AM No comments: