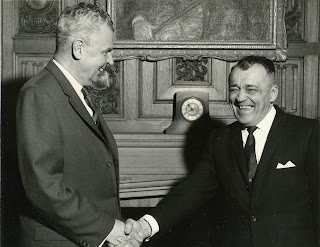 J. Nicholas Mandziuk was born in Western Ukraine on December 13, 1902. In 1904, he immigrated with his parents to Canada, where they settled in the Ashville district of Manitoba. He graduated from the Teacher's College in 1921 and taught for several years in various schools in Manitoba and Saskatchewan. In 1933, he graduated with honours from the University of Manitoba with a Bachelor of Law degree. He practiced law in Oakburn, Manitoba and, in 1961, was honoured by being named Queen's Council. In Oakburn, he was active in community affairs, serving as Chairman of the Oakburn School District, President of the Oakburn Board of Trade, and Manager and founding member of Oakburn Credit Union. He was also active in the Ukrainian community, where he served on the following boards and associations: member and Chair of the Board of Oakburn National Home, founding member and executive member of St. George's Ukrainian Orthodox Church in Oakburn, President of of the Manitoba Ukrainian Self-Reliance Association, and General Secretary of the Ukrainian Canadian Congress. His active role in the Ukrainian community resulted in his being awarded the Shevchenko Medal by the Ukrainian Canadian Congress and the Canada Service of Excellence Award by the Ukrainian Self Reliance League (USRL).


In 2005, the daughters of  the late late J. Nicholas Mandziuk, Sonja Bejzyk and Darcia Zemianski, donated his archives to the University of Manitoba Archives & Special Collection.  The J. Nicholas Mansziuk, Q.C., fonds (MSS 215, PC 194 (A.05-51) consists of personal correspondence, newspaper clippings, photographs, and scrapbooks pertaining to J. Nicholas Mandziuk's political career as a Member of Parliament for the constituency of Marquette during the Diefenbaker era.
Posted by James Kominowski at 6:08 AM No comments: