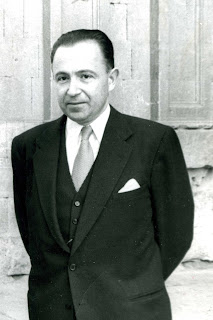 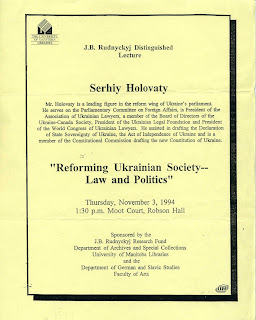 Poster of the First Lecture with Serhiy Holovaty 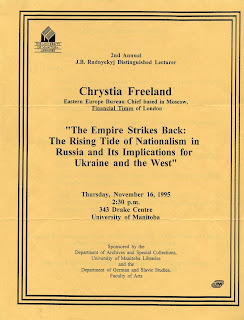 Poster of the Second Lecture with Chrystia Freeland 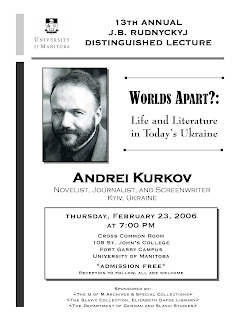 Poster of the Thirteenth Lecture with Andrei Kurkov

On March 8, 2018, the J.B. Rudnyckyj Lecture Series presented its 25th talk, with guest speaker, Andreas Umland.  The roots of the lecture series go back to June 1992, when the late Dr. Jaroslav B. Rudnyckyj established the J.B. Rudnyckyj Endowment Fund. The newly created fund was to facilitate the growth and promotion of the Slavic Collection (Elizabeth Dafoe Library), by way of new acquisitions, as well as the preservation, maintenance and growth of the Slavic portion of the U of M Archives & Special Colelctions. In addition, the funds was to sponsor an annual lecture series, that would bring to the University of Manitoba, an internationally acknowledged scholar, to speak on a topic of interest to those pursuing Eastern European and/ or Slavic Studies.

Jaroslav Bohdan Rudnyckyj was born in 1910 in Peremyshl, Galicia. He studied at the University of L’viv, where he obtained his M.A. in 1934, and his Ph.D  in 1937,  having specialized in Slavic philology and the onomastics (geographical place names) of eastern Europe. To continue these and other studies abroad, he left his homeland in 1937, staying for a short time in Berlin, Rome, and Paris, before lecturing in Slavic philology at the Ukrainian Free University in Prague. In 1949, shortly after his immigration to Canada, he was appointed chairman of the newly created Department of Slavic Studies at the University of Manitoba, a position he held until 1976. He also served as a professor with the Ukrainian Free University  in Munich (1943-1980).
Posted by James Kominowski at 6:45 AM No comments: 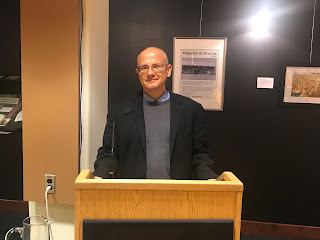 Dr. Andreas Umland during his talk at the U of M Archives 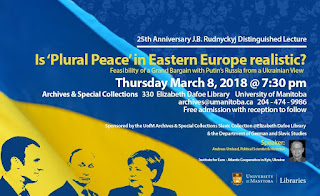 The 25th Annual J.B. Rudnyckyj Distinguished Lecture took place on Thursday, March 8, 2018, in the University of Manitoba Archives & Special Collections. The guest lecturer for the event was, Dr. Andreas Umland.  Dr. Umland began his talk, titled, Is 'Plural Peace' in Eastern Europe Realistic: Feasibility of a Grand Bargain with Putin's Russia from a Ukrainian View, with providing an overview of the current political situation with Ukraine, Russia and the European Union.  One of the 'plural peace'  suggested solutions discussed, concerned a German proposal which involved the permanent exclusion of Ukraine from either NATO or the EU. This proposal would involve changing the charters of both organizations, and would not be accepted by the Ukrainian side. Dr. Umland suggested that eventually a solution will be reached, but at some future point when Ukraine would be more secure and stable, and therefore have a greater say on what it would and would not accept in terms of a peace agreement.
.

Andreas Umland is a political scientist specializing in contemporary Russian and Ukrainian history. He holds an M.A. from Stanford University, M.Phil. from the University of Oxford, and Ph.Ds. from the University of Cambridge and Free University of Berlin. He has held fellow- or lectureships at the Hoover Institution, Harvard University, St. Antony's College, Urals State University, the Taras Shevchenko National University of Kyiv, the Catholic University of Eichstaett, and the University of "Kyiv-Mohyla Academy."  Since 2014, Dr. Umland has been a Senior Research Fellow at the Institute for Euro-Atlantic Cooperation in Kyiv, and a member of the Academic Advisory Council of the European Integration Committee of the Parliament of Ukraine. He has authored and edited numerous books and papers on Ukraine and Russia, and is general editor of the book series "Soviet and Post-Soviet Politics and Society" published by ibidem Press at Stuttgart.

The well-received lecture had around the university and external communities in attendance. The talk was sponsored by the U of M Archives & Special Collections, the Slavic Collection (Elizabeth Dafoe Library), and the Department of German and Slavic Studies. Following the lecture, Andreas Umland continued to answer questions at the reception that followed his talk.
Posted by James Kominowski at 11:45 AM No comments: 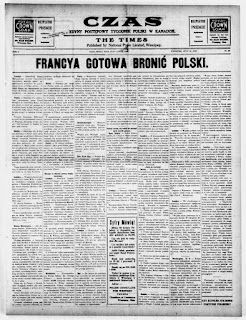 Example of one of digitized pages of Czas
(the main page of the July 21, 1920 issue) 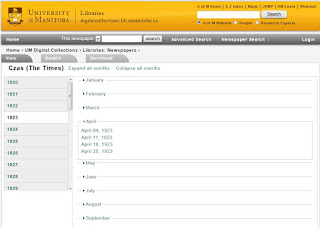 The online format of the Czas searchable database. 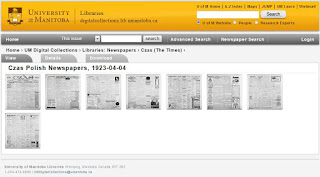 An example showing the complete digitized pages of a single issue
of Czas (the July 21, 1920 issue ).

Czas is the oldest Polish language newspaper weekly in Canada. It was established in Winnipeg in the fall of 1914, and first published by a local Canadian firm owned and operated by the well—known Czech immigrant, Franciszek Dojacek. From its beginnings, Czas ensured that its Polish roots and content remained intact, as it was closely connected with members of the Polish Gymnastic Association, Sokol. It was through Sokol’s perseverance and guidance that facilitated the creation of the newspaper. Following the post war years, the Polish Combatants' Association (SPB) provided steadfast support of the paper.  In 2004 the publication relocated to Toronto, and merged with another Polish newspaper, Związkowiec (The Alliance), to form Czas-Związkowiec.  For nearly a century it has remained an invaluable resource of information to the Polish community in Canada -- informing new immigrants of local and international events, and assisting them with the new challenges and adjustments they faced in their new country.

In the Fall of 2003 the executive board of Czas – Polish Press Ltd., agreed to find a permanent home for their collection of bound newspapers. The Board approached the U of M Archives & Special Collections to house this unique and historical collection of Polish-Canadiana. In January 2004 the executive board of Czas officially transferred the Czas newspaper collection from Czas – Polish Press Ltd., to the University of Manitoba Archives & Special Collections.

With the support of the members of the Friends of Czas, the U of M Archives has embarked on digitizing the complete run of Czas from 1915 to 2004,  which corresponds to the period when the newspaper was headquartered in Winnipeg. Thanks to a University of Manitoba Outreach Award, and a  Heritage Grant  from the Province of Manitoba, the years 1920-1951 have so far been digitized. Additional years will be digitized over the next several months, -- with the eventual digitization of the entire run up to, and including the year 2004. In addition, thanks to the support and expertise of the U of M Libraries' Discovery & Delivery Services, the Czas online searchable database has been created and uploaded to the University of Manitoba Digital Collections' website. The search engine is able to conduct keyword searches with or without inputting diacritics or ligature signs that are found in the Polish alphabet.
Posted by James Kominowski at 8:01 AM No comments: