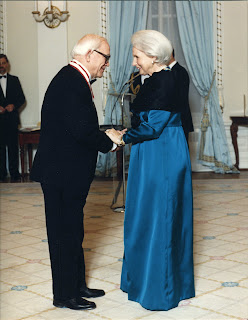 In the winter of 2011 the late  Dr. Margareth Mol , the widow of the internationally renowned artist and sculptor, Dr. Leo Mol, donated his archives to the University of Manitoba, Archives & Special Collections.  The collection consists  mainly of textual records, photographs and some artifacts . Included in the Leo Mol fonds, is a comprehensive collection of exhibition brochures  that chronicles Mol’s long and illustrious career.  There is a rich array of correspondence  between Mol and many well-known individuals, including: Cardinal   Joseph Ratzinger (the future Pope Benedict XVI); Canadian Prime Minister John Diefenbaker; and U.S. President Dwight D. Eisenhower.  In addition, the collection contains the many awards, accolades and medals Mol received over the years, both nationally and internationally. The Leo Mol Fonds consists of  3.65 m of textual records,  over 2,500 photographs and over 3,000 slides.

Leo Mol, was born Leonid Molodozhanyn,  in Polonne, Ukraine (Khmelnyts’ka oblast’). He studied sculpture at the Leningrad Academy of Arts. In 1945 he fled to Germany from the advancing Soviet army, and moved to The Hague.  In 1948, along with his wife, he emigrated to Canada, and settled in Winnipeg.  Mol started off as a ceramic  artist and then as a church painter, which included creating over 80 stained glass windows, including  those in Winnipeg’s main Ukrainian Catholic Cathedral of Sts. Volodymyr and Olha. He is best known for his sculptures, many of which are displayed at the Leo Mol Sculpure Garden at  Winnipeg’s Assiniboine Park. He is one of the very few sculptors to have been commissioned to create a statue of Ukraine’s national bard, Taras Shevchenko, for four separate cities: Washington D.C., Buenos Aires, St. Petersburg and Ottawa.

Posted by James Kominowski at 9:40 AM No comments: