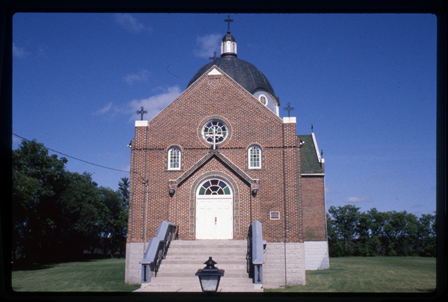 The Manitoba Eastern European Heritage Society is a group of researchers inspired by a desire for knowledge of the architectural history as well as mutual concern for the spiritual future of Eastern European churches in Manitoba. The principal members of the Society are Stella Hryniuk, Basil Rotoff, and Roman Yereniuk. These three researchers, on behalf of the Manitoba Eastern European Heritage Society, received funding from the Historic Resources Branch of Manitoba Culture, Heritage and Recreation to travel around Manitoba documenting the architecture, art, and history of the province’s Ukrainian Byzantine-rite churches.

The group identified 140 Ukrainain Catholic and Orthodox churches across the province, plus an additional twenty Eastern European Churches. They documented eighty churches, taking into consideration the condition of the churches, prominent architectural features, and the scattered distribution of churches across the province. The project began in 1986 and with the help of student researchers was completed in 1990 with the publication of the book “Monuments to Faith: Ukrainian Churches in Manitoba.”

The collection was donated to University of Manitoba Archives & Special Collections by Professors Stella Hryniuk, Basil Rotoff, and Roman Yereniuk in 2008.  The fonds consists of material relating to the history of Eastern European communities in Manitoba. This includes over 400 photographs, almost 7000 slides, close to 200 contact sheets, close to 3000 negatives, correspondence, maps, research notes, church directories, church inventories, and architectural evaluations of Manitoba Eastern European churches. The collection also includes taped interviews with or about various church artists or architects. The majority of slides and photographs from the Manitoba Eastern European Heritage Society (MEEHS) fonds have been digitized and are made available to view on the  U of Manitoba Libraries Digital Collections webpage for the Manitoba Eastern European Heritage Society fonds.

Posted by James Kominowski at 11:00 AM No comments: