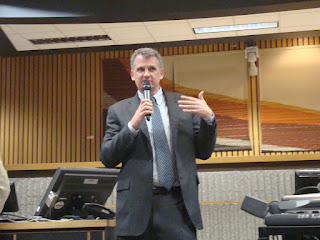 Dr. Timothy Snyder speaking at the University of Manitoba

The 20th Annual J.B. Rudnyckyj Distinguished Lecture took place on Thursday, March 29, 2012, in the Moot Court, Robson Hall (Faculty of Law). The guest lecturer for the event was, Dr. Timothy Snyder, a Professor of History at Yale University, and New York Times bestselling author, with his book, Bloodlands: Europe Bewteen Hitler and Stalin. His lecture also titled, Bloodlands: Europe Between Hitler and Stalin, reflected upon his research on the history of mass murders in central and eastern Europe between 1933 – 1945. His lecture took the mass murders out of isolation and examined them beyond the traditional historical understanding of their causes.


The lecture was very well attended, and included both members of the university and external communities. The lecture was sponsored not only by the U of M Archives & Special Collections, the Slavic Collection (Elizabeth Dafoe Library), and the Department of German and Slavic Studies, but by the Consul General of the Republic of Poland (Toronto), and the Canadian Polish Congress (Manitoba Branch). Without the generous support of the latter 2 sponsors, the event would not have been possible.
Posted by James Kominowski at 8:39 AM No comments: